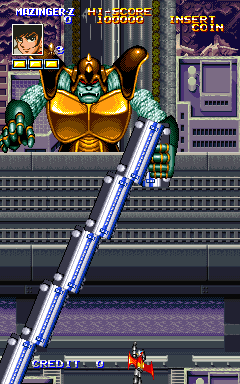 Based off the manga created by legendary artist Go Nagai in 1972.

The anime series on which this game is based was known briefly in the United States as Tranzor Z. It aired in the U.S. in 1985 and was produced by Three B. Productions, Ltd.

If you set the territorial dip switch to Japan, not only will the Japanese title screen be shown, you will also see the boss's name (before you start fighting, written in Japanese), and cutscenes are shown in-between levels. These are absent if you set the switch to World.