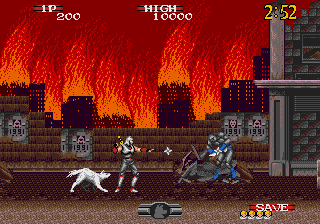 Some time after destroying Neo Zeed in Revenge of Shinobi, Joe Musashi decides to spend some time in america with his student, Kato. One day though when a mysterious terrorist group known as Union Lizard takes an elementary school hostage, Kato sets out to defuse the situation, only to be fatally wounded by one of Union Lizard's members.

Angered by this, Joe promises Kato's mother that he will avenge Kato's death. This time however, Joe's not alone because Kato's dog, Yamato will accompany Joe in his quest for avenging Kato's death.