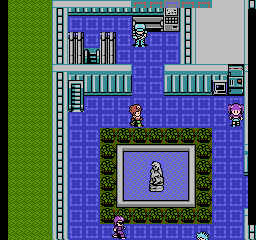 Lagrange Point is a science fiction role playing game developed and published by Konami. In the 22nd century, humanity has begun to explore and colonize the worlds of other stars. Three outer-space space stations were built by the ISIS corporation at the Lagrange point between the Earth and the Sun - Satellite Base, Land 1 and Land 2. One day, after coming under attack by strange and mysterious mutant-like creatures, the Lands turn into hostile wastelands. Earth decides to send several expeditions to investigate the situation, but none returned. Lagrange Point stars Jin, a member of the third expedition on a mission to discover the truth behind the attack. But, as they reach their destination, he and his team are stalked by heavily armed robots and only Jin survives the attack. Lagrange Point follows a traditional RPG formula laid out by similar games at the time, such as top-down exploration, round based battles, stores, experience points and so forth. However, Konami added new concepts and valuable ideas to the mix. Although the player can control up to four characters at the same time, a total of ten different heroes can be played throughout the game, from humans to cyborgs and robots. Additionally, Battery Points (BP) replace the traditional magic points and are used to fuel attacks - however, although Health Points (HP) do increase after each level-up, Battery Points don't and B Tanks must be purchased throughout the game in order to do so. The player also doesn't automatically gain money after each battle and must instead visit Terminal Rooms to collect his loot - thankfully, these rooms can be found at every corner of the game's numerous cities and are also used to save the game in progress or heal the party. Lagrange Point's content is vast and expansive, and special vehicles give the player ample chance to roam the world in various degrees of style, from the Solar Car, the all-terrain Mobile to the Cruiser boat or the flying Hoverplane. As the game progresses, many more features are made available, such as the ability to combine and create new weapons in Factories or the option to leave characters behind for later use (both only available in the Satellite base). 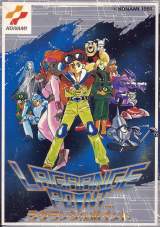