Tactical role-playing game. The game's story opens in the town of Astholm, which is spiritually protected by a sapphire wielded by the priestess Firis. She is one of six priestesses charged with holding a special gem to have together held an archaic power for several generations. During the town's Sapphire Festival, Firis is kidnapped by the henchman of Ezelkiel, a man bent on collecting the priestesses to revive an ancient evil. The player takes on the role of the nameless Hero who, along with being sworn to protect Astholm, is the lover of Firis. He immediately sets out with his army to rescue the priestess and ends up becoming involved in a much larger-scale predicament involving the world's other priestesses and gems.

The game's six main characters each have their own armies of six soldiers, making the total number of troops thirty-six. Each character has a set character class, which allots them fixed attributes and allows some of them to learn and use certain spells. The leaders are well-rounded Heroes that use both weapons and magic. Wizards rely almost entirely on powerful magic. Fighters battle close-range with a number of weapons. Archers attack from afar using arrows. As in traditional RPGs, battles earn each character experience points which go towards a level up, increasing that character's stats such as hit points, strength, defense, and wisdom. 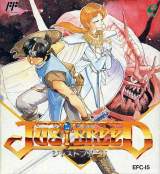