Once upon a time, there was a peacefully productive city. until one day a powerful syndicate took over, and it wasn't long until the city became a cesspool of crime, violence, and even corruption. despite the problem 3 police officers who consist of Adam Hunter, Axel Stone, and Blaze Fielding were trying to convince their superiors to create a special task force for this matter, but for unknown reasons the task force proposal was denied. because of this problem, rather than seeing their city being torn apart by the syndicate the trio of determined officers decided to quit the force after they decided that enough was enough. so now it's all up to Axel, Adam, and Blaze to put their own lives at stake in order to take the law into their own hands, and give the city back to it's rightful citizens on the Streets of Rage. 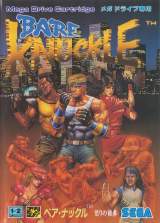