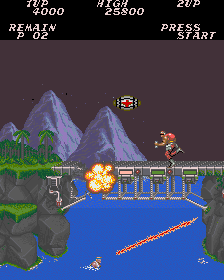 In 2631, a meteorite strikes the Galuga archipelago near New Zealand, carrying with it a dormant alien being. Two years later, a terrorist organization calling themselves Red Falcon takes over the island as part of their plot to invade the Earth. Bill Rizer and Lance Bean, of the Contra unit, are sent to the Oceania island to stop the evil threat.

'Contra' is a hectic one or two player platform shoot-em-up featuring 10 stages. In addition to the standard side-view levels, there are also "3D maze" stages in which the player must proceed through a series of corridors inside an enemy base, destroying various sensors, in order to reach the core of the base.

As players fight their way through the enemy-packed levels, additional weapons can be collected. If the player loses a life, they will also lose any weapon power-up they were carrying. Available weapons are:
Machine Gun: Auto-fire.
Spread gun [S]: Allows the player to fire 5 shots in an arc.
Laser: Will shoot a long laser that can take out many enemies in a row.
Fire Ball [F]: A gun which fires small fireballs in a corkscrew pattern.
Rapid Bullets [R]: Increases the firing rate of the player's currently equipped weapon. Works with the Machine Gun and Fire Ball.
Barrier [B]: Will make the player invincible for a few seconds. 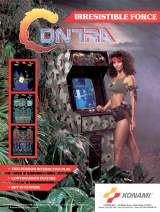