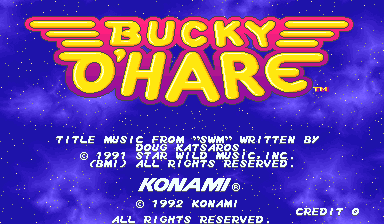 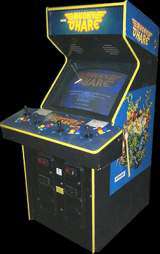 Bucky O'Hare was released in September 1992, it is based on the short-lived cartoon aired in 1991. Originally based upon the comic book created by Larry Hama in 1978, this was the first serious competitor to the TMNT because it wasn't completely children-oriented and the comic book wasn't a TMNT wannabe. However, due to poor distribution of the TV show and financial problems with the producers the show couldn't see a second season.

Several of the staff members went on to form the developer Treasure the following year. 'Escape Iuchi5' is Hiroshi Iuchi, the director of "Ikaruga" and "Radiant Silvergun". 'Gammer Kikuchi' is Tetsuhiko Kikuchi, the character director of "Guardian Heroes", and 'Star Hanzawa' is Norio Hanzawa, the composer for most of Treasure's games.