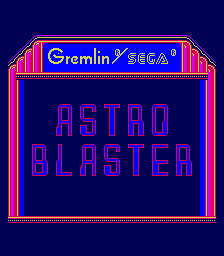 Astro Blaster is a 1- or 2-player game in which players must advance through squadrons of alien ships in an attempt to dock with the mother ship. Players move their ship left or right and shoot at attacking squadrons. A special time warp allows the player to slow down the alien space ships and their laser fire, while maintaining his own ship and laser fire at normal speed.

As players go through the game play, each step is directed by the voice of mission control. Mission control keeps players informed of fuel status, provides a countdown on warp, keeps track of the number of ships remaining, and monitors the player's laser temperature.

As players enter each new sector they encounter a different number of alien squadrons. Players must destroy all ships in each squadron to pass through the sector. One squadron of rockets is extremely difficult to destroy, but players can pass through this squadron by hitting a few enemy ships. Once a player has destroyed all the squadrons in that sector, he enters an asteroid belt. He must maneuver and shoot his way through the asteroids to reach the mother ship. If fuel is critically low when the player enters the asteroid belt, he can receive extra fuel by shooting the red fireballs interspersed among the asteroids. After passing through the asteroid belt, the player's ship docks with the mother ship and refuels.

There are 29 different alien squadrons players encounter as they move through the different sectors. Every new sector increases in difficulty with different numbers of squadrons in each sector. Each alien ship has its own individualized sounds, movements and firing capability.

During their game, players must keep track of fuel consumption. As the player's ship moves through the sector, it consumes fuel. The player must ensure he has enough fuel to advance through the sector and dock with the mother ship. Extra fuel can only be obtained by shooting red fireballs or docking with the mother ship. The screen also displays the laser temperature. As players fire, the laser temperature rises. When they cease firing it cools down. If the laser overheats, players lose their laser fire until it cools down.

By depressing the warp button, players slow down the enemy ships and their laser fire while maintaining his own at normal speed. Players receive one warp per ships and are awarded one warp upon docking, if he has used his warp in the previous sector.

Each alien ship destroyed carries a different point value. Players also receive double points for destroying an alien ship when their fuel is in the red. To add further excitement, there are 25 tasks that a player performs during the course of the game and receives a secret bonus. Players do not know what these tasks are, but a good player will keep track. The 25 tasks are consistent throughout the game. Players also receive a bonus for any fuel they have left when they dock with the mother ship.

With a two-player game, players alternate at the conclusion of each sector, not after each ship. Players receive 3 to 5 ships, which is operator adjustable. The game is over when a player runs out of fuel, loses all his ships, or crashes while attempting to dock with the mother ship. The top three scores are displayed and the game ranks players from 1 to 99.

PLAY INSTRUCTIONS :
1. Shoot enemy space ships for points.
2. Shoot fire balls for extra fuel.
3. Use warp to slow down enemy ships and bombs (only once per sector or ship).
4. Discover how to earn secret bonuses for extra points.
5. Dock with mother ship to refuel after each sector.
6. Game over when you run out of ships or fuel.
7. Laser will not fire while overheated. 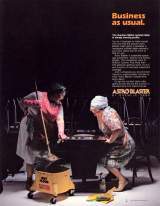