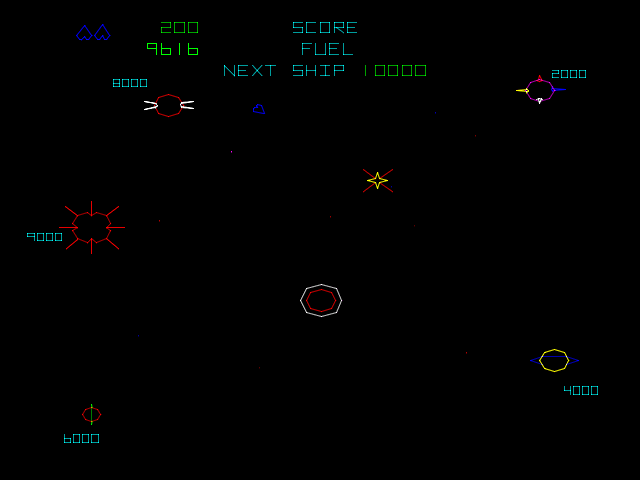 Gravitar was released in August 1982.

Developed in 14 months, Gravitar was the first game that Mike Hally produced and designed for Atari. The concept of Gravitar was based on a combination of "Lunar Lander" and "Asteroids".

Gravitar has a color X-Y video display. This display, with its three color guns and higher voltage, has the same technology that was used in previous Atari black-and-white X-Y displays. However, the screen now displays dazzling colors and unique visual effects.

Gravitar was the first game to have a real-time dynamic perspective - When you enter a planet, the screen zooms in to give you a closer look. Unfortunately, it was a colossal failure, primarily because of its difficulty. While beautiful to look at for its time, the learning curve was too steep too early - When you're plugging quarters into a machine, you stop playing a tough game. But interest in the title has resurged among hard-core arcade gamers. This is because once the controls are mastered, the game is phenomenally addictive.

On the other hand, saying it's "phenomenally addictive" under whatever condition is a highly subjective and, let's face it, completely unsubstantiated statement, especially in light of the game's disastrous performance in the actual marketplace. People loved hard games in the days, like Defender. This game was simply a poorly conceived piece of eye candy, an example of tech and former laurels taking the place of cohesive planning and testing.

The default high score screen of "Cyberball 2072" features names of many Atari arcade games, including GRAVITAR.

The prototype of this game is known as "Lunar Battle".

* A Well Known Cheat/Bug : At a joint between 2 vectors (>90 degrees), position yourself below and shoot straight up. If you can align yourself just right, the shots will travel through the walls at the joint. Without moving from side to side, just thrust up and voila, you are now inside the wall. You can now move around and shoot the gun pods from behind. This is especially useful if you can get under the world!

* Hint 1 : Develop skill for controlling the space ship in regular and negative gravity.

* Hint 3 : Attack the red alien planet first for maximum challenge and 20,000 bonus points! Completion of this planet immediately places a player in the next solar system where all planets are worth 9,000 bonus points.

* Hint 5 : Many planet terrains have safe areas or 'blind spots' from which the player can safely shoot at bunkers.