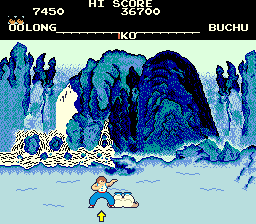 Yie Ar Kung-fu is a single-player one-on-one fighting game in which the player takes on the role of 'Oolong' who must fight and defeat eleven martial arts masters. His ulimate goal is to win the title of "Grand Master" and honour the memory of his father, who was killed while fighting the current grand master.

The player faces a variety of opponents, each with a unique appearance and fighting style. Some opponents are also armed, with weapons including nunchaku, throwing stars and a club. The player can perform up to 16 different moves using a combination of buttons and joystick movements while standing, crouching or jumping. Moves are thrown at high, middle, and low levels.

Yie Ar Kung-Fu plays incredibly quickly, with the player having to be constantly on the move to avoid getting 'pegged in' by some of the game's tougher opponents. There is no time limit in which the opponent must be defeated but Oolong possesses a finite amount of health, represented by a health bar at the top of the screen. Once Oolong's health is fully depleted, the match is over. 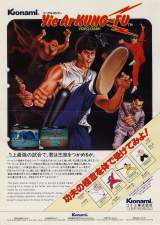