published 33 years ago by 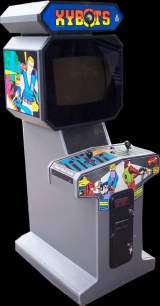 You start you game with your man (or men in the two-player game) standing at the end of a corridor. Your goal is to make it to the exit while inflicting the most amount of damage without taking too much damage. There is also a quick tutorial during this first level to help you better gain experience for the coming levels.

General Strategies :
* Always look at the level map when you enter a level. There will be a couple of second delay before you enter the level. Look for where the exit is. This also helps to determine whether you are being put in the middle of a group of Xybots.

* Your character can lose energy in a variety of ways :
1) Naturally within the maze itself. You lose 2-3% of your energy in the maze per second. If you purchase the Extra Vitality, your energy will be lost at a slower rate. This rate is usually about 1% per second.
2) Saucers that go Kamikaze will take out 25% of your energy when they hit.
3) All other Xybots take out 10% energy per hit, but they usually fire multiple times.
4) Using the Zapper.

* Saucers like to pick up items and carry them to other parts of the level. This can be especially frustrating if you know where an item is, then return to find it gone because a saucer picked it up. Keep this in mind unless you have taken out all the saucers.

* Money is a very precious commodity in this game. This is what you use to buy the permanent and temporary items in the Supply Store. After level 7, you will be buying everything you need to get through the level. At the bare minimum, you should constantly purchase the following :
1) Wall Mapper x 3 - To give you an idea of how the maze is set up and also where the closest exit is.
2) Monster Mapper x 3 - To give you a general idea of what non-Guardian Xybots are running around.
3) Vitality x 4 - To minimize the amount of energy you lose on the level.
4) These purchases will last you a minimum of three levels before you have to purchase more temporary items.

* In addition to the above, attempt to get permanent items when you can. The best ones would be extra armor and shot power.

* Use the Warp Exits when you can. With the 75,000 points, you get 3 coins added to the bonus coins for using the warp. In addition, your energy is brought back to 100% again so you don't have to waste money healing up. The warp exits are located on levels 1 and 4.

* Energy orbs can give either a 50% or 100% boost to your energy. If you are only down a little, do not use it. Wait until you are under 50% energy before getting one.

* If you are placed in a wide open area, immediately look for the exit or find a protected corner. This prevents the Xybots from surrounding your character.

* Xybots follow a specific pattern when they move around. Once they spot your character, though, they will immediately go in for the attack. Sometimes multiple Xybots will swarm the area to try to eliminate your character quickly.

* When approaching corridors that turn, doorways, or openings in the wall, turn your character toward that area and sidestep to the turn or opening. That way, if there are any Xybots lurking around, you can get the first shot in and take them out before they know what happened to them.

* Your character's range of vision is four squares around. It is the same for the Xybots. When going down corridors, it's a good idea to put a few shots ''down-range''. The reason is you may catch one of the Xybots ''napping'' and eliminate them before they can react.

* When approaching openings or doorways, stop short of said opening. If a Xybot is patrolling, they won't see your character but you will see their movement pattern and then you can plan accordingly.

* Many of the levels have blue barrels. These can be used for cover when you are busy having shootouts with the Xybots. Just ''peek'' around them to get your shots off.

* Speaking of blue barrels, you can use the Zapper on them to collect items. These items are random.

* Don't use the Zapper unless it is absolutely necessary. Its purpose is to stun the enemies for a couple of seconds. This makes them vulnerable to your attacks. The energy loss to do this, though, is an uneven exchange. You will do better just shooting it out with the Xybots. Of course, if you are surrounded, then that would be a good time to use it.

* When fighting the Flys, keep in mind that they move up-and-down in addition to side-to-side making them very hard targets to hit. It addition, you will need to keep moving around to avoid their fire and the blue barrels provide minimal protection since they can fire above them.

* The teleporters in the maze act in a duel fashion. When you step on one teleporter pad, you will arrive at another one. Get off and step back on the teleporter pad you just arrived on to teleport to another place. Levels with multiple teleporter pads can be very confusing unless you do this.

* Make sure you pick your battles. If you are on a level loaded with Xybots, it may be better to find the exit then to shoot it out with them. Granted, you can get the points, items in the maze, and possible coin bonuses for score. This, though, may be an unfair exchange since you will be taking a large energy drain with little return.

* Make sure you note the Xybots colors when you are fighting them. This is the key to tell you how many hits it will take to take them down. Don't be surprised if you hit a Xybot once and it is still firing on you.

* Some levels have false walls. These walls can be taken out with your laser fire. They do not show up differently on the main level map. Before you go shooting at the walls, make sure of what is behind those walls. Opening one of these walls could be like kicking a hornet's nest. You find yourself surrounded by Xybots intent on erasing you from existence.

* Some of the levels have a ''wrap-around'' feature. This basically means if you exit the maze on the right side, you will reappear on the left side. It gives the illusion of one continuous maze. On these types of mazes, when you look at the map, make sure you note enemies not only on your side, but on the opposite side as well.

* The big thing is to learn how to turn and move at the same time. This is in addition to being able to fire while performing this maneuver. If you can accomplish this smoothly, your chances of survival are greatly increased.

* On the first level, don't collect any money for totally massive bonus points at the end. And lots of cash.

Two-Player Strategies : These strategies are in addition to the general strategies.

* First of all, each player is immune to the other player's shots.

* If all the Xybots are destroyed, the first player that exits the maze gets the bonus.

* The first player that exits the level gets a 5,000 point bonus.

* If one of the players enters the warp, both players will warp regardless of the other player's location.

* If one of the players dies, and the other makes it through that particular level, the other player is brought back with 50% energy. The other player also loses all the items they may have collected on that level. If both players die, the game is over.

* Learn to work with each other. The combined firepower of two people is quite significant if applied the right way.

* Watch each others back. When one person is facing one way, have the other face the other way in case some Xybots want to sneak up on you.

* In addition, watch in directions that you are unprotected. For example, in a corner one person can look straight while the other looks to one of the sides.

* Don't get greedy and have one player take everything. Learn to share items found. Also, share coins at the Supply Area so that both characters can get maximum benefits. This is a game of cooperation so treat it as such.

Boss Strategies : In order to eliminate the Master Xybot, you must take out all six of his lasers.

* You will be placed on a platform to the left of the Master Xybot. In front of you will be his hand with six openings in it.

* These openings flash at random. When they flash, they fire shots at your character. Your goal is to hit one of these openings when it is flashing. When you do, that opening is cannot fire shots anymore.

* You must run back and forth on the platform to not only avoid the laser fire, but to also shoot up the openings.

* You must take out all six openings in order to defeat the Master Xybot.

* On the later levels, the rate of fire from these openings gets faster.