Here is the PC Engine conversion of the popular vertical shooter Xevious originally released by Namco in 1982. The Solvalou, a hi-tech space fighter, is on a mission to stop an enchant computer that has awaken after thousands or years of sleep - armies of enemy drones and amphibious tanks have invaded the land and must be destroyed. One of the greatest feature of Xevious is definitively its dual level attack system (we are left to wonder if Xevious wasn't the first vertical shooter to offer such feature). Although the Solvalou can shoot ahead and destroy any airborne ships that happen to face it, it can also drop bombs on the ground and blow holes in enemy's facilities and other tanks and canon towers. Any Xevious fan should also notice that this game is not a straight conversion of the original game - in addition to the original arcade mode, which lets the player enjoy the original arcade game's layout, a completely new Fardraut mode offers a totally different game with an extensive new story line, exclusive music tracks, new enemies, different Solvalou ships and (and foremost) power ups. These power ups are somewhat limited but include Rapid-Fire, Wide-Lasers, Shields and destructive super-bombs. 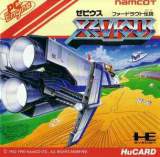