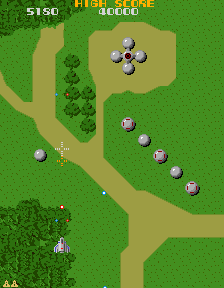 Xevious (pronounced 'zeevious') is a vertically-scrolling shoot-em-up in which the player pilots the heavily-armed 'Solvalou' combat ship and must destroy the evil Xevious forces trying to take over the planet. The Solvalou is equipped with two weapon systems; the forwards-firing "air zapper" for shooting air-based enemies and 'blaster bombs', for destroying ground-based enemies. To enable accurate targetting of the air-to-ground blaster bombs, a white and blue targeting indicator is situated in front of the Solvalou. This flashes when an enemy is in its sights.

Enemy craft appear in a number of different guises; from the standard variety that arrive in large numbers but shoot slow-moving projectiles, to exploding black spheres that shoot projectiles at high speed. There are also rotating shields that cannot be destroyed and must be carefully avoided. Ground enemies are a combination of both stationary bases and moving vehicles, most of which fire slow-moving projectiles. A gigantic, floating fortress called 'Andor Genesis' appears in certain areas; this is defeated by knocking out its core.

The game becomes progressively more difficult as the player becomes more skilled - once the player does well at destroying a certain enemy type, a more advanced enemy type will replace it. This can be reverted by destroying flashing-red 'Zolback' radars found on the ground, which will cause the more advanced enemies to be replaced with weaker ones.

AIR UNITS :
These are the air units you will encounter during the game. A players skill will determine what air units they may face.
* Andor Genesis (mother ship) - the large ship in Areas 4, 9, and 14.
* Bacura (resistor shield) - the large rotating floating walls which are indestructible.
* Brag Zakato (energy blaster) - medium black ball, with a red dot, that explode and send several shots at your Solvalou.
* Bragza (crystal) - the crystal core of the Andor Genesis mother ship which escapes upon its destruction.
* Garu Zakato (energy bombarder) - large black ball that explode sending out a multitude of shots in all directions.
* Giddo Spario (energy blast) - small, white crystal-like projectiles that come in diagonally at your Solvalou.
* Jara (spinner) - looks like a UFO with a spinning gear in the middle.
* Kapi (deflector) - flat-looking fighter with two front projections that flies in, fires multiple shots, then escapes quickly.
* Sheonite (escort) - small spinning diamond-shaped craft which escort your Solvalou for a bit and fly off.
* Terrazi (destructor) - flat looking, diamond shaped fighter that flies in, fires multiple shots, then escapes quickly.
* Torkan (scout ship) - ridged fighter that flies in, fires one shot, then escapes quickly.
* Toroid (fleet) - ring-shaped fighter which is traditionally the first enemy you encounter.
* Zakato (energy launcher) - small black ball that explodes sending a single shot at your Solvalou.
* Zoshi (death squad) - the round spinning fighter which can sometimes attack from behind.

GROUND UNITS :
These are the ground units you will encounter during the game.
* Barra (energy station) - small pyramid-shaped buildings.
* Boza Logram (dome network) - a structure of four Lograms surrounding a Derota.
* Derota (defense site) - the small octagonal-shaped gun batteries that fire multiple shots at your Solvalou.
* Domogram (rover) - looks like a mobile Logram that travels along the roads and fires shots at your Solvalou.
* Garu Barra (energy base) - medium and large pyramid-shaped buildings.
* Garu Derota (mega site) - the large octagonal-shaped gun batteries that fire multiple shots at your Solvalou.
* Grobda (tank) - the tank-like vehicles that travel along the road. They can detect when your bombsight is on them and they will move out of the way.
* Logram (sphere station) - silver circular domes that fire single shots at your Solvalou.
* Sol (citadel) - underground structures which rise up when initially bombed.
* Zolbak (detector dome) - domes with red squares on top and around their base. 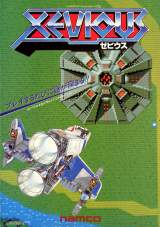