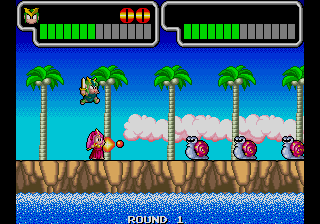 The 3rd sequel of the well-known series. During the first round, Wonder Boy is walking through a world collecting food to get energy; at the end, a Boss is waiting. After a few worlds have been completed, Wonder Boy is mostly flying around and shooting different enemies.