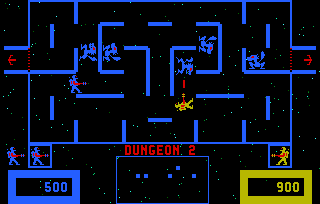 Wizard of Wor is a maze-based shoot-em-up featuring one or co-operative two-player gameplay. In a two-player game, player one controls yellow Worriors while player two controls blue Worriors. Players are also able to shoot each other's Worriors, earning bonus points and causing the other player to lose a life. Team-oriented players can successfully advance through the game by standing back-to-back and firing at anything that comes at them.

Each single-screen dungeon consists of a grid forming walls and corridors. There are doors situated at the left and right edges of the screen that are inter-connected, making the dungeon wrap around. Whenever a door is used by a player or monster, it deactivates for a short period, making it impassable. A small radar display indicates the positions of all active monsters.

As long as a player has at least one life in reserve, a backup Worrior is displayed in a small sealed box at the corresponding bottom corner of the dungeon. When the current Worrior is killed, the box opens and the player has 10 seconds to move the back-up into play before automatically being forced in.

Both Garwors and Thorwors have the ability to turn invisible but will always appear on the radar. All enemies except the Worluk can shoot at the Worriors.

Each dungeon starts filled with six Burwors. In the first dungeon, killing the last Burwor will make a Garwor appear. In the second, the last two Burwors are replaced by Garwors when killed; and so on. From the sixth dungeon on, a Garwor will replace every Burwor when killed.

There will never be more than six enemies on the screen at once. On all screens, killing a Garwor causes a Thorwor to appear. From the second dungeon on, after the last Thorwor is killed, a Worluk will appear and try to escape through one of the side doors. The level ends when the Worluk either escapes or is killed; in the latter case, all point values for the next dungeon are doubled. 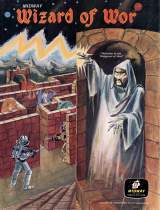