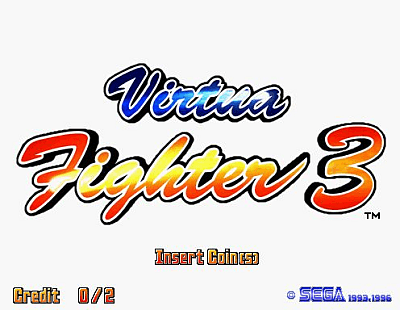 Virtua Fighter 3 also adds undulations in the stages - knowing how to use these to your advantage is key to winning the game (by moving to higher ground, for instance). 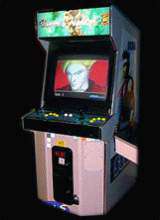 Click to enlarge
(members only)
Runs on the Sega "Model 3" Hardware.

Virtua Fighter 3 (or VF3 for short) was released in September 1996. It was the first game to run on the Sega Model 3 hardware. It serves 1,000,000 polygons per second! VF3 is three times faster than "Virtua Fighter 2".

Some of the less apparent graphical improvements in VF3 include (but not limited to) : transparent water effects in Jeffry's stage; motion blur effects in certain moves, such as Pai's high-kick, and specular reflection on Dural's body.

Notable for being the only game in the series, Until Virtua Fighter 5 R to feature Taka-Arashi, a Sumo wrestler character.

* Ranking Mode : Insert your coin(s), hold all four buttons (A+B+C+D) and press Start. When the game begins, your attacks will be illustrated on the screen and your rank will be displayed when the game is over.

* Winning Pose Select : When you win a match, you can select a specific winning pose by holding down Punch, Kick, Guard or Dodge button each one corresponds to a different pose. Some characters-like PAI- have more than four victory poses, and each fighter has a special pose and saying which only appear after a PERFECT VICTORY.