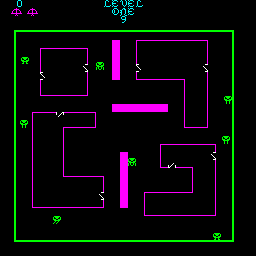 Venture is a 1- or 2-player "Gauntlet" style game (although Venture pre-dates the Atari legend by 4 years) set in a multi-level dungeon. The player, armed with a bow and arrow fights through enemy infested levels in the quest to collect treasure.

Each dungeon is represented as a floor plan, populated with a number of "Space Invader" like monsters. Numerous rooms and their corresponding doors are clearly marked; these rooms are the treasure rooms and each one must be cleared. When the player enters a room, the viewpoint zooms in on the action and the room takes up the whole screen. Each room has a treasure or weapon guarded by one or more creatures. Players must try to retrieve the treasure while avoiding (or killing) creatures and obstacles. Only in the rooms themselves can players use their bow and arrow.

When the treasure is successfully taken out of the chamber, bonus points are awarded. The screen image then returns to the original, zoomed-out floor plan and the player moves on to the next room of their choice. Once a room has been cleared of its item, the player no longer has access to that room. The player must collect all of the treasures on the current level before descending to another dungeon. 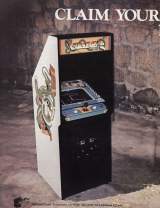