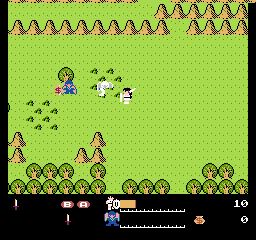 Valkyrie no Bouken Toki no Kagi Densetsu is an action/adventure game by Namco. Marvel Land is at stake, the dark lord Zouna has stolen the key of time and now spreads terror over the whole kingdom. The gods are compelled to answer the people's prayers and, one day, they send a maiden Valkyrie from the heavens to save Marvel Land and its defenseless inhabitants. The heroine wanders around a top-down world map (which features a day/night cycle) and randomly encounters monsters who periodically surround her. She starts her long journey equipped with a short sword and more powerful weapons can be purchased later in the game, as well as other items such as potions (restore health), Cure (cures poison), Axes (to cut through forests), Helmets, keys (to unlock doors and chests), lanterns (to light up dungeons) and so forth. As she progresses through the game, she also finds chests that contain many different items. However, Valkyrie no B?ken is not a traditional RPGs - Valkyrie doesn't talk to other characters on her journey and the gameplay is mainly action-oriented and relies on item-fetching. Although Valkyrie gains experience points as she defeats enemies, she doesn't level up on the battle field but when she rests inside Inns scattered throughout the game. Leveling up also gives her later access to magic spells such as Healing, fireballs, enemy freeze and so forth. By pressing Start during the game, she can equip weapons or items and map them onto the B button (by pressing left and right) or map spells onto the A button (by pressing up and down). Interestingly, whenever the player starts a new adventure, the game asks a couple of personal questions such as Zodiac Sign, Blood Type and favorite color. The answers actually influence the internal rules of the game and the player's status at the beginning of his journey.