An update of "Mortal Kombat 3", with new characters added to the original MK3 cast. There are lots of other additions and goodies in the game (see Updates section (REV. 1.0)). 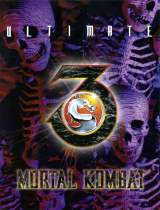