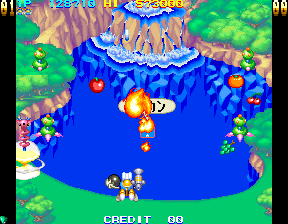 Twin Bee Yahho! differs from Detana!! TwinBee in that the player can adjust their playing style before starting the game to suit their preference. The player begins by choosing between three difficulty settings: Practice, Normal, and Special. Practice course is the game's easiest setting and lasts only three stages, whereas the Special course is the hardest setting and is recommended to expert players. The player will then select between four different charged shots. The regular Charge Shot from Detana! TwinBee is selectable, along with a Charge Punch, a Charge Split (which will cause the player's ship to shoot duplicates of itself), and a Charge Explosion that fires at eight directions at the same time. The player will then choose between two control styles: one which fires the gun with one button and drops bombs with the second, while the other style shoots and drops bomb at the same time with a single button (either button can be used).

Like in previous Twin Bee games, there are two kinds of power-ups: bell power-ups obtained from the sky and land power-ups that can be retrieved from destroy ground enemies. The bells can be changed to up to six colors this time (yellow, blue, white, green, red, and pink), each with a unique attribute. GwinBee returns as well as a power-up item, along with the twin attacks that can be performed with GwinBee or another player.