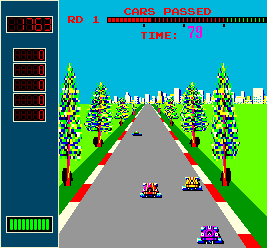 Sega's Turbo is a 3-D racing game from Sega in which the player must pass a set number of rival racers (usually 30) before the time limit expires. Success would see the player progress to the next stage. Turbo's gameplay was unique in that centered ENTIRELY on the passing of cars; while the tracks the player raced on had all of the usual bends and turns of the racing genre, they existed purely for effect and at no point did the player actually have to STEER through them.

Turbo was the world's first full-color, sprite scaling racing game and not, as many assume, Namco's "Pole Position". Turbo was released a full year before the Namco legend and is a further example of how Sega has dominated and innovated within the arcade racing genre.

Top scores were kept on a LED panel to the left of the screen (unfortunately these scores reset every-time you turn the game off). 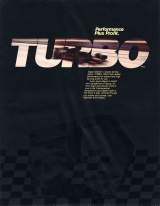