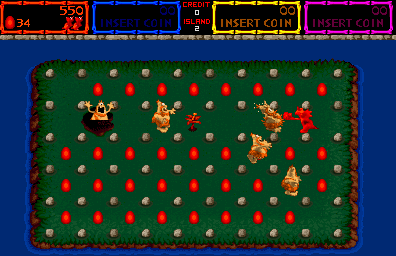 1 to 4 players take on the role of a cute dinosaur, selected from the four on offer : Rex (red), Bloop (blue), Spike (yellow) and Gwen (lavender). The game takes place in a prehistoric land called 'Og' and is made up of forty-nine different islands; the dinos must collect all of the dinosaur eggs that lay on the islands, while avoiding the unwanted attention of a tribe of one-eyed cavemen, called 'Trogs'. The dinos can punch the attacking Trogs; one punch will only stun a Trog but several punches will knock the enemy off the screen. There are 4 different Trogs who pursue the dinos :
* Brown Trogs who use only their fists.
* Red Trogs who use clubs and create fires or holes in the ground.
* Blue Trogs who pop up out of the ground and roll stone wheels.
* Green Trogs who bounce around trying to crush you with their springs.
On each island, after the dinos have gathered up all of their eggs, they must make their way to the base labeled 'Home'; from here they will move on to the next island.

Between each stage, there is an intermission where the players' Dinos will dance, with an on-screen caption proudly declaring 'Excellent!', 'Congratulations!', 'Nice Work!', 'Good Job!' or 'Dino-Mite!'. On occasion, an intermission screen appears that shows a Trog planning another attempt to eat a Dino. 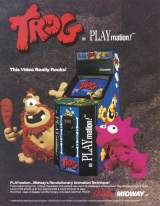