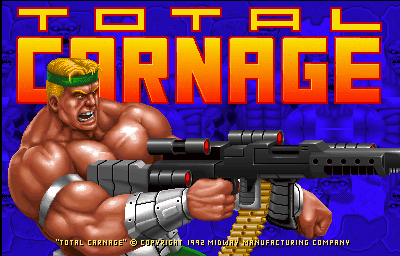 A pseudo-sequel to Williams' superb 1990 shoot-em-up, "Smash TV", Total Carnage is set in a futuristic parody of the first Gulf War. General Ahkboob, himself an obvious parody of Sadam Hussein, has set his vast army of infantry, tanks and BioGenetic Mutants onto the world.

1 or 2 players must fight through the enemy-packed levels, rescuing reporters and civilians as they go. Total Carnage retains the dual-joystick control of its predecessor, but introduced new weapons, enemies and large, scrolling levels to the original game-play.

As with Smash TV, Total Carnage features the infamous 'Pleasuredome'; accessible only if players manage to collect the 220 keys that are hidden throughout the game's levels. Total Carnage has a much higher difficulty level than that of Smash TV. 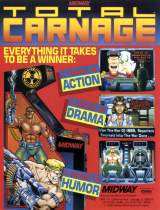