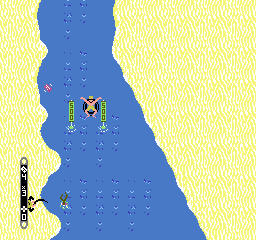 Wanna be a real party animal? Then, you just gotta play Toobin'! It's the most fun anyone can have on an inner tube!
You and a buddy can take turns paddling down a prehistoric swamp, jostling with dinosaurs and cavemen.
Or cruise down some modern city river where you'll try to evade nasty punks and slimy industrial sludge (ugh, real barfo!)
If that isn't far-out enough, then float down some Martian canals - where the water's purple and everything's really out of this world!
These are just examples, dudes. Toobin's got so many places to tube around, it'll blow your mind.
So jump in, the water's totally rad and bad!