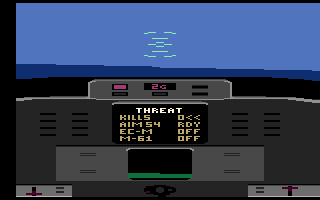 The gameplay like other simulation games consists of taking off, flying, combat and landing. Though most of the gameplay focuses around dogfighting with enemy bogeys (dodging missiles). In addition to that, there are also night-flying missions that add difficulty due to limited vision.

Taking off and landing however, also requires additional skill as your doing it on the USS Enterprise (No relation to Star Trek), not on your standard airstrip. Pay attention to the F.D. officer as your preparing to take off (since he's the boss when it comes to this stuff...and try not to run over him...yet).

After each mission you will receive a Mission Rating which is based on your flying skill, number of bogey kill and number of weapons fired.