The Revenge of Shinobi [Model 28] 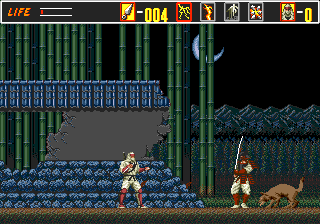 A few years ago, Joe Musashi defeated the terrorist ninja group known as Zeed, and peace returned to the world for a while. those years have passed and Zeed has returned, this time they have become much stronger and powerful (not to mention having their name changed to Neo Zeed). aside from their world domination plans, Neo Zeed have a new goal, the demise of the man who defeated them. and to begin, Musashi's sensei (the ninja teacher) was killed, and as if that wasn't enough, Joe's fiancee, Naoko was kidnapped and taken hostage by Neo Zeed. And now for Joe Musashi, this time it's personal.