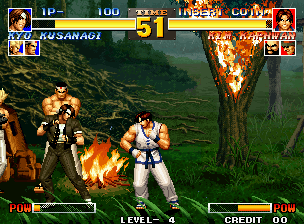 8 teams comprised of 3 characters each square off again to take out Rugal Bernstein.