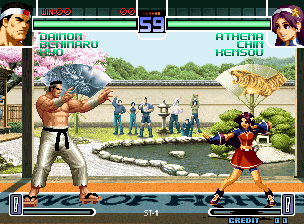 The King of Fighters 2002: Challenge to Ultimate Battle is a one-on-one fighting game for one or two players and is the ninth game in the series.

The game discarded the 4-on-4 "Striker Match" format used in the previous three games in the series and returned to the 3-on-3 Battle format used prior to "King of Fighters '98".

During MAX Activation, the player's offensive and defensive strength is increased for a short period. In this state, a Super Special Move can be used without consuming Power Gauge stock. There are also MAX Super Special Moves, which are Super moves that can only be performed during MAX Activation with one Power Gauge stock, and MAX2 moves, that require two stocks while low on health.