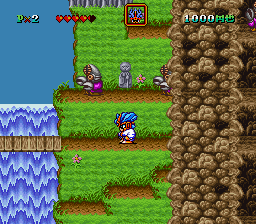 Great Battle Gaiden 2 is a side-scrolling action game by Banpresto and featuring four 'Super Deformed' robots and super-heroes all based on popular Japanese series such as Gundam, Ultraman or Kamen Rider. The game starts when a curious space-ship hurls towards Earth. On board, a weird character with red burning hair and chrome glasses has, once again, decided to take over the world. Your favorite four heroes are available at the start of this journey to save the Universe - namely Ultraman, Gundam, RX Kamen Rider and Fighter Roa (a proprietary Banpresto character). Each character can punch in four directions and can use special attacks (which can be purchased in shops throughout the game, but more on this later). Stages are quite vast and various enemies try to stop our heroes in their quest, from popular Ultraman's Blatran aliens to unusual (in the west) monsters from Japanese folklore such as Daruma Dolls. The goal of the game is to find and defeat bosses hidden inside sort of theaters, and this in a specific order. The game also includes several mini-games such as Tetris-like, Breakout-like and Shooter-like challenges. They usually appear on the playfield during the game (in a shape of sorts of winged televisions) and if the player touches them before they disappear, he will be rewarded with a mini-game where he can earn Banpresto money (As a side note, an option from the game's menu allows the player to directly play these mini-games). This cash can then be spent inside shops owned by Green mobile suits Zakus - they sell various items, power-ups and the ability to switch to a different character.