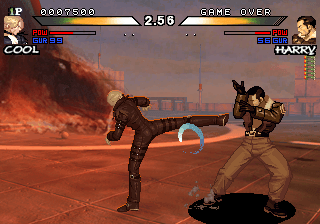 Using the Bitmap Dump option in the test menu you can come across several title screens. "Gut Reaction", "Rubbin Out" and "A Blow For Freedom". There are 2 screens for "Gut Reaction".

They also misspelt start as 'strat' in the test screen.

Hidden within the graphic ROMs are the sprites of four characters that were taken out of the game. It is believed that the game may have not been entirely completed, given that four characters were cut from the game, the character bio's contain varying errors, and some of the staff went over to SNK (Cool and Harry appear very similar to KOF 99's K' and Maxiama characters).