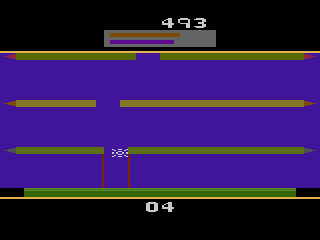 Despite the name, the game itself really doesn't resemble the movie 'The Entity' at all. In the game your goal is to move the Entity to the highest plane of existence before your energy runs out. You actually have to move walls to achieve this.

The game is divided up into several rows (planes of existence) similar to Taz, but in The Entity you can only see three rows on the screen at one time. Between each of the rows is a portal (hole) through which you must force the Entity. As previously stated, this is accomplished through the careful placement of walls. The walls are moved by pressing the joystick left and right. Once a wall lines up with the portal it will 'lock' into place, thus giving the bouncing Entity no where to go but up.

The Entity doesn't like to be pushed around, in fact that makes him angry. So every time you force the Entity through a portal it will begin to resist by bouncing faster and pushing back on the walls more and more. Also keep in mind that the Entity isn't stupid, if it sees that you're about to trap him, he'll turn red and begin to go berserk. Trapping the Entity once he turns red is a difficult task at best, so try not to tip him off by keeping the walls back until the last possible moment.

Thankfully you have a secret weapon up your sleeve:'Liquid Helium'. By tapping the fire button you can give the Entity a little squirt which will slow him down for a bit. Ironically it's the same Helium (located in a tank at the bottom of the screen) which ultimately proves to be your downfall. If you are unsuccessful in forcing the Entity up through the planes of existence it will plunge into the tank and cost you 25% of your energy (but on the bright side the Entity will be slowed down for a short time). Once you run out of energy the game is over.