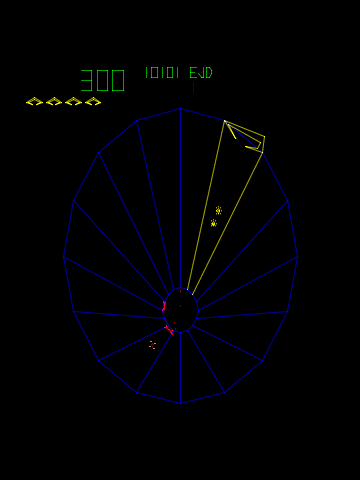 Tempest is a classic into-the-screen shoot-em-up in which the player controls a claw-shaped "Blaster" ship that moves around the outer rim of a three-dimensional, wireframe tunnel. Enemies move down the tunnel towards the player's Blaster ship and must be destroyed. Any contact with either incoming enemy fire or the enemies themselves will cost the player a life. Completion of a tunnel will see the player warp through "hyperspace" to the next tunnel to tackle a new wave of enemies.

The tunnels are each rendered in one of sixteen different geometric shapes. Enemies increase in number as the game progresses and if an enemy reaches the outer rim occupied by the player's Blaster ship, it will chase and attempt to kill the player. Rim enemies can be killed, but this is difficult to achieve.

Some enemies also drag "spikes" - in the form of lines in the middle of the corridor - behind them as they travel up the tunnel towards the player. These spikes must be avoided during the "hyperspace" warp sequence at the end of the level, as contact results in the loss of a life.

One new feature Tempest introduces is "Skill-Step". This allows players to start a new game on the same level as was previously reached (although the new game must be restarted within thirty seconds) without having to replay previous levels. This allows skillful players to continue being challenged, while less experienced players can try to master higher levels. The 99 skill levels of play includes sixteen different playfields and seven different enemy targets.

* The tubes are divided into cosmic corridors through which the aliens travel, although some aliens such as Pulsars and Flippers can move from one corridor to the next. Regardless of the tube shapes, aliens always begin their invasion from the small, distant end of the tube. The sixteen unique tube shapes are as follows :

The playfield's color scheme changes every sixteen levels. In addition, other events also cause playfield color variation. The SuperZapper causes the playfield to flash as enemies are zapped. Playfield rails flash rainbow colors when a player earns a bonus life and Pulsar enemies cause sections of the nearest rim to disappear and - during the pulse phase - adjacent rails to flash.

Levels 97 and up - Keeps color scheme from Levels 81-96, with random shapes from Level 99 onward. 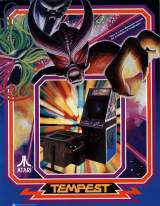