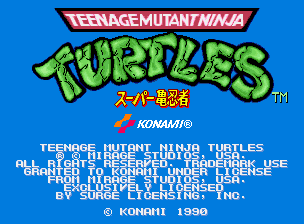 The subtitle of this game translates from Japanese as 'Super Turtle Ninja'.

This game was based on the first season of the original 1989 cartoon show.

The Teenage Mutant Ninja Turtles were created by Kevin Eastman and Peter Laird in 1984 and published by Mirage Studios. The whole idea for the comic book (which was originally published in Black and White) came from the nickname 'Ninja Turtle' that one of the creators had when they were young.
In 1987, Playmates Toys bought the rights of the characters to produce a line of Action Figures. That same year Playmates made a TV adaptation of the story for a 5-episode mini series which became a huge success. Two years later, the series went on full production and was aired on CBS stations from 1989 to 1996 (with brief hiatus in 1993-1994).
The success of this 'Humanoid Action Animal' concept spawned (or shed some light on) many other comics, toys and TV shows such as Bucky O'Hare, Swat Kats, C.O.W. Boys of Moo Mesa, Street Sharks, Biker Mice from Mars among others; most of them became complete blunders.

After the first series was cancelled other shows based on these characters appeared, such as, Ninja Turtles: The Next Mutation (Saban Productions, Live Action), Teenage Mutant Ninja Turtles and TMNT Fast-Forward. However, the 1980's craze never took off again.

Konami hit the jackpot with this game. It was so successful that Konami went on a license-acquiring craze. They got the rights to many American (and some European) TV shows and Comic Books for home and arcade videogames with a quality so good that sometimes shadowed the original work.

This game is mainly based in the first 5 episode mini-series. However, it contains some references to the original comic book. The opening scene is a mix between a scene in the TV show in which a building is raided by the TMNT to find for the first time the Technodrome and a scene of the comic book in which Shredder sets fire to April's building when he finds she's harboring the turtles (that scene was also taken for the movie). At the Parking Lot scene, there is a van that has the logo of TCRI. TCRI (or TGRI in the movie) was the company responsible for the mutagen; in the TV show, it was Shredder's invention.

The first names of turtles; Michaelangelo, Raphael, Leonardo, and Donatello, are the names of Italian Renaissance artists who lived between 1386 and 1564. Three of those artists had full names which were respectively Michaelangelo Buonariti, Raphael Sanzio and Leonardo Da Vinci; but as for Donatello, that was his only name.

* Various Sewer Level Tricks :
1) When fighting in the sewer level, move your character as close as you can to the edge of the stone floor without falling to the water. If done correctly, no enemy in this level including the boss can touch you here as long as you remain on the floor's edge!
2) Stand just below the ledge in the middle of the screen. Then jump straight up. You will land just on the edge of the upper level. Nothing can hurt you for the rest of that level, but you can kill anything that comes close enough to you (You can't move up or down though, or you'll have to repeat this trick).
3) You can keep from getting hit by walking right along the edge of the brick floor. This prevents enemies from attacking you from multiple directions. You still need to nail enemies directly in front of you or behind you. This is easy with Donatello.

* You can theoretically get unlimited points. Use the yellow guy's boomerang. Lead one yellow guy in such a way that he gets stuck at an object (fire hydrant or barrel) between you and him, aligned horizontally. He will try to move toward you, but he won't be able to move since the object is near him. Get close enough to him so that he starts throwing boomerangs. You can kill each one for (wow!) 1 point.