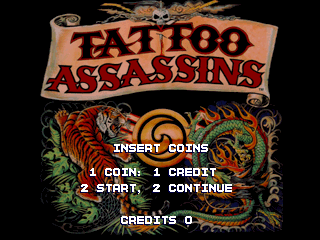 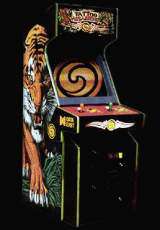 Released in March 1995. Tattoo Assassins has become the stuff of arcade legend, but for all the wrong reasons. It represents one of the most tragic tales in game design - and perhaps the only verifiable example of a game being utterly dismissed by the actual programmers themselves.

The original premise was straightforward, if a little ambitious - use Data East graphics hardware to produce a "Mortal Kombat" beater. The gameplay would include over 200 Fatalities, Animalities (this was BEFORE "Mortal Kombat 3" introduced them to the world), Nudalities (although nothing TOO explicit) and an array of "sickening moves", which basically consisted of farting and spraying diarrhea at your opponent. This is true.

Bob Gale (producer of the Back to the Future movies) came up with the original 'story' and concept, while coding duties fell to 'Data East Pinball' (now Stern Pinball). Several problems soon became apparent, however, not least that of the host hardware falling some way short of being up to the task demanded of it. The game's production was doomed from the very beginning. Below is a transcript from one of the game's programmers who, due to the fact that he still works for the parent company, wishes to remain anonymous.

"Tattoo Assassins was the brainchild of Data East Pinball's (DEP) Head of Engineering, Joe Kaminkow. He had become buddies with Bob Gale after Data East produced the Back to the Future pinball table - and from time to time Bob would send Joe his latest movie script. One of these scripts involved tattoos that came to life and did battle with each other, and it was here that Joe got the idea for a video game. MK2 was in the process of becoming the biggest arcade hit in recent history, so in typical DEP fashion Joe decided to do a rip-off of MK2. We'd have more hidden moves and fatalities than anyone had ever dreamed of. In fact, you could just randomly hit buttons and get a fatality. Each character had their bodies adorned with tattoos, which gave them their various powers and fatalities. The Indian character, for example, had an eagle on his chest; one of his many fatalities was that his eagle tattoo would come off his chest and crap on the other character, who would melt away. Each character had their own sets of fatalities, but a lot of the fatalities weren't character specific, like the Godzilla foot stomp fatality, or the fly swatter, or Cruise Ship fatality. As far a nudalities went, there would be a puff of smoke and your character would be naked, but with arms and hands in the appropriate places. and we'd tie everything together with a Hollywood film shoot to get the hype machine going full tilt. He then sold DE Japan on the idea, which was impressive since before TA (and after) DEP only manufactured pinball machines.".

"As you may be aware, DEP (who became SEGA Pinball, then Stern Pinball) have always been known for cranking out sub-standard pins (pinball tables). The primary reason for this was lack of engineering manpower. While development teams at Williams would get a whole year to design, program & play test a given model, their counterparts at DEP were given only 3-6 months. To his credit, DEP survived because Joe was so good at snagging the best licenses for our pins, i.e. Star Wars and Jurassic Park.".

"The team was promised $25,000 bonuses and $25 per game manufactured if we could make it to production within 8 months. This was a pretty juicy carrot, and we all hung out our tongues and nodded our heads and began chasing it like fools. Of course, hindsight is 20/20 and all that but I think you will agree that the deadline was ridiculous considering we had no video game experience whatsoever amongst us.".

"During the whole project, we were required to work 12 hours a day, 7 days a week. Our lunch and dinner were take out - paid for by the company, which was great, but the purpose was to keep us from going out and having an hour long lunch or dinner break away from our desks. Every meal was a "working" meal, meaning we would have meetings in the conference room as we ate to keep from interfering with the "real" work. If we were late to work, or left early, we would be threatened with having some of our $25,000 bonus docked. The 'carrot' had become a big baseball bat we were beaten with almost daily. One guy walked out after having his bonus docked for coming in at noon, and he quit on the spot. The next day he was placated and he came back. I remember this moment vividly--working away at 3:30 a.m. one morning. I was so physically exhausted that I casually leaned over to the garbage can and vomited, after which I went right back to tapping away. My fingers never left the keyboard.".

"Our biggest deadline was the ACME convention. We made it there with a game that played, but there were no special moves for any characters except for one electric zap thrown in for A. C. Current just before we got on the plane. The game was a joke but no one seemed to notice--we were congratulated at having made it that far, which was impressive only if you knew the whole story. One guy at the show made a point over and over again that he could get through the entire game start to finish by pounding the electric zap button over and over with one finger. I wanted to beat him senseless.".

"The biggest problem at this point was that we were all completely burned out. We knew the game was crap, and that we were no longer capable of fixing it. After we got back from the show, we were so "crispy" that we no longer cared about the money--our only true reward for finishing up was that we wouldn't have to work on it any more. The artwork looked pretty bad because it had all been a rush job to make the show. This was an incredible shame because the artists were so talented, but their talent were being scuttled in dealing with the crappy video source. New artists were brought on to help pitch in, but it was too little too late.".

"New games like "Primal Rage" and "Killer Instinct" came out, and they blew Tattoo Assassins away. We resisted violently any attempt to change the game to make it better, because that would mean we would be working on it longer -- I've since read about this attitude being common in projects where coders are placed under very high pressure. The artists were hoping that the programmers would come up with some new game play feature to make the game sell, regardless of the quality of the graphics, whereas programmers were hoping that the ARTISTS would miraculously 'beautify' things so that the game would sell regardless of the game play. One programmer actually stopped working almost entirely in the hopes of getting fired -- he had signed a three year contract and would have to be paid off in a huge way if he got fired. He wanted out anyway to go get married and start up his own dot-com.".

"Karla Keller was never going to be "Nancy", although that was who she was obviously modeled after. Lyla Blue was indeed Slash's wife. TA was actually developed within Data East Pinball in Chicago, IL. We had a working relationship with Slash because of the Guns and Roses pinball we created. His wife is a professional model.".

"I remember our testers. One of them posted some really scathing stuff to Usenet. We had several of our competitors' games in the lab with our TAs, and we'd have to go down to the lab every half hour to stop them playing pinball and make them go back to playing our game. We couldn't even PAY people to play TA it seems :)".

Carlos and Daniel Pesina from Midway's MK series worked in Tattoo Assassins. After that, Midway didn't want them to work with them in "Mortal Kombat 3", so they killed Johnny Cage (the only Daniel Pesina character that didn't wear a mask) and excluded Raiden (Carlos Pesina).

Note : The game claims there are 220 fatalities (see 'Tips And Tricks' section for more info).

The DeLorean DMC-12 which appears in the Hit and Stay fatality is a nod to co-creator Bob Gale (who worked on the 'Back to The Future' trilogy).

* Random selection : at the character selection screen, highlight Billy Two-Moons and press Up.

* Alternate colors : highlighting your characters and press Start to change their colors.