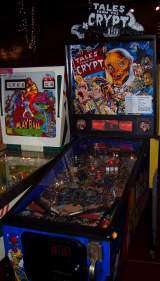 Released in December 1993, though it is rumored that this game was originally going to be the next Data East game released after "Lethal Weapon 3" (in 1992), as there is a preview for Tales from the Crypt during attract mode of that game.

Based on the TV series, which in turn was based on the original comic books by EC Comics.

This game was dedicated to William Gaines (1922-1992), the EC Comics publisher who published the original comic books.