Hack and slash video game. There are two playable characters: Brodan or his twin sister Shardan, whose gameplay characteristics are identical despite their physical differences. The character walks in a horizontally scrolled world from left to right, defeating enemies with their sword, wielded either standing or kneeling. Though the player is also equipped with a shield, it is merely for decoration.

Before each level starts, a map appears, showing the player's progress through the land on their way to castle Craggamoor. Scrolls give additional information about the current location. Once the player enters the castle, the map is replaced by a gloomy picture of an outside view of the castle. Most of the levels consist of simply fighting enemies with the sword, but sometimes the player must avoid traps or solve puzzles.

The player starts with five lives, an energy meter and a hit strength level. A player's energy is reduced every time they are hit by enemies, but their hit strength can be increased by using potions. There are different types of potions. Some increase hit strength, some give an extra life, some provide short-term invincibility, while still others kill the current opponent immediately.

There are eleven different areas, five in the area surrounding the castle, and six within. The player starts at their own city gate, and progresses through the countryside towards the castle, passing through city streets, a forest and a graveyard. Once within the castle, the player wanders through catacomb-like levels, which lead to the wizard's tower at the end. The world is inhabited by 13 different enemies and a single supporting character, the ostrich-like creature called The Animal. 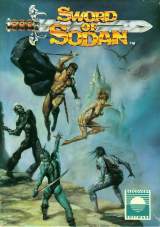