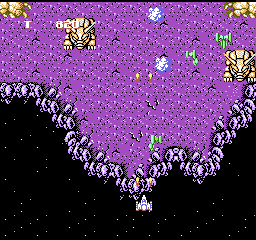 Super Star Force is a shooter/adventure game by Tecmo and is a Famicom exclusive sequel of Star Force. In the year 2010 and after the events depicted in Star Force, the monstrous planet Gordess was destroyed by the Final Star and the galaxy was at peace. But many mysteries still remain and a mission to explore the past and to reveal the truth about Gordess is assembled. Commander Ralph, on board the Neo Final Star, accepts the dangerous mission of traveling through time and to answer the mysterious questions regarding the planet's uncertain origins. The goal of the game is to visit all the seven dungeons hidden in each time zone and to retrieve the precious time stones. The gameplay in Super Star Force is split into two distinct parts. The above ground stages feature traditional vertical-scrolling shooting action. There, the player destroys waves of enemy ships and collects 'time points'. These points are at the center of the gameplay - special red doors scattered through each level can warp the Neo Final forward or back in time in exchange of time points, other red doors stamped with a "W" lead to the next time-zone and finally, these points are also used to purchase new items inside shops dotted around each area. Then ground areas are underground dungeons/maze that Ralph must explore on foot and this is also the location where the time stones are hidden away. There he fights countless enemies, blast walls with his bombs and defeat enormous bosses. Super Star Force has an incredibly non-linear structure and some conditions must be fulfilled in some areas in order to open dungeon entrances in other stages (see the secrets section for more info).