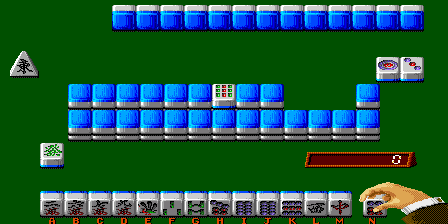 Super Real Mahjong Part II begins with your female opponent taking off her sweater so she can get down to a serious game of mahjong. The tiles are mixed up, the wall is set up, the players build their hands, and the game begins. Every time the player wins a hand, his opponent strips off a piece of clothing. Every time the player loses a hand, she puts a layer of clothing back on. Should the player reveal all six strip sequences, gameplay will continue and with every win, the last strip sequence will replay. Only when the player runs out of betting funds will the game be over. The game features no continues.