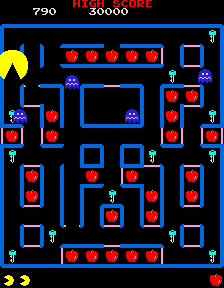 Super Pac-Man is a 1- or 2-player game where you are in control of the legendary Pac-Man. As in the original "Pac-Man" game, the goal is to clear each maze, but this time, instead of dots, the maze consists of prizes which are locked away behind gates. There are two ways to access the prizes. You can eat the keys which open a particular gate, and not always the gate which is closest to that key. Or you can crash through the gate after you eat a Super Pill and become Super Pac-Man. You are not required to eat all of the keys in order to complete the stage.

Four Power Pills are in maze and allow Pac-Man to turn the tables on the ghosts and eat them for a short time. When the ghosts begin to flash, time is running out and they will switch back, so beware.

New in this game is the Super Pill. There are two Super Pills in the maze which allow Pac-Man to become Super Pac-Man for a limited period of time. While in Super form, Pac-Man can crash through the maze gates, fly over the ghosts and avoid being killed (or eat them when they're blue), and travel at super speed whenever the player presses and holds the Super Speed button. When the super power is about to run out, Pac-Man flashes white and then returns to his normal form. You can extend the duration of Super time by eating a regular Power Pill. The Super time will then be extended by the duration of the ghosts' blue time.

Pac-Man loses one life whenever a ghost catches him when the ghost is not blue and Pac-Man is not in Super form. You start with a set number of lives ('Lives' dip switch), and bonus lives can be awarded to you as you reach or pass certain preselected point values ('Extra Lives' dip switch).

The tunnel is a great way to put some space between you and any ghosts that are on your tail since they can only move half as fast as you when they are in it. In Super Pac-Man, the ghosts are also slowed down by travelling through the passage directly beneath the ghost pen.

As the stages increases, the ghosts speed up their pursuit of Pac-Man and they stay blue for shorter and shorter periods of time after he eats a Power Pill until, in the high stages, they do not turn blue at all.

Super Pac-Man also features bonus stages in Stage 3, Stage 7, and every fourth stage thereafter, where there are no ghosts, a time limit, and Pac-Man is in Super form throughout the stage. Your goal is to eat all of the prizes in the given time limit. As with gameplay on the regular levels, you don't need to eat all (or any) of the keys. You are awarded the remaining time in the counter as points for successfully eating everything. With each Bonus stage, the walls and gates change color.

1) Pac-Man enters from the left side of the screen, followed closely by the ghosts. When Pac-Man exits the screen to the right, the ghosts stop. Super Pac-Man appears high up from the right and the ghosts helplessly watch as Super Pac-Man flies over their heads and exits to the left. This intermission is played after Stage 2.

3) Pac-Man enters from the left side of the screen, followed closely by the ghosts. Before Pac-Man makes it all the way to the right, he simply disappears, leaving the ghosts stunned and puzzled. As the ghosts look around for Pac-Man's whereabouts, Clyde looks up and notices the extremely large version of Super Pac-Man falling from the sky, instantly scaring all of the ghosts blue before this super-duper Pac-Man squashes them. This intermission is played after Stage 11, which is the third Bonus Stage.

4) The extra-large Super Pac-Man enters from the left side of the screen, followed by a pack of 32 ghosts, 8 of each color. After exiting to the right, four scared (blue) super ghosts reappear from the right. Much to their misfortune, they are being chased by 32 normal-sized Pac-Men. This intermission is played after Stage 16 and every 4th stage thereafter.

* Pac-Man - Once again, you control the little yellow hero as you guide him through the maze and onto victory. Pac-Man's goal is to gobble up every target item. He must avoid contact with the ghosts unless they are blue as a result of Pac-Man eating a Power Pill, or when Pac-Man is in Super form as a result of eating a Super Pill. Unlike the other classic Pac-games, Pac-Man does not move any slower when he's eating targets than when he isn't. True to the other Pac-games, however, he is still capable of turning around corners faster than the ghosts, so make as many turns as possible when the ghosts are on his tail.

* Super Pac-Man - After eating a Super Pill, Pac-Man becomes large and in charge. In Super form, he can eat through gates without the use of a key, fly over ghosts without colliding with them (the ghosts actually change in appearance, becoming squat or thin depending on the direction they are moving; this ability does not prevent Super Pac-Man from eating blue ghosts), moving faster when the Super Speed button is held down, and extending the duration of his super power by eating a normal Power Pill. When Pac-Man's Super power is about to expire, he flashes white just like the ghosts do when they are about to change back to normal.

* Ghosts - Blinky, Pinky, Inky, and Clyde are back. Basically, they behave the same. Blinky follows you more closely than any of the other ghosts, shadowing your trail, Pinky tries to stay one step ahead of you by second-guessing which way you will go and trapping you, Inky usually turns away if you take him head on, and Clyde does his own thing for the most part. In this game, their behavior is a tad more random than in the first game, so patterns cannot be relied upon. Also new in Super Pac-Man, they will exhibit a "stutter" behavior from time to time where they seem to shake in one spot briefly before continuing on. This can sometimes save you if you are being chased, or it can mess you up if you are following behind a ghost too closely.

* Scared Ghosts - As in the original game, if Pac-Man eats a Power Pill, the ghosts will turn blue for a short period of time. The higher the stage, the shorter that time becomes, until the ghosts don't turn blue at all (but they do change direction). Eating ghosts scores big points (see Scoring below), but watch out when they start flashing because they're about to change back to their normal state.

* Power Pills - A carry-over from the original "Pac-Man" game. These four large white blinking dots in the corners of the maze allow Pac-Man to temporarily chase and eat the ghosts until they begin to flash and turn back to normal. In this game, eating a Power Pill while in Super form extends Super time into the ghosts' blue time.

* Super Pills - These two green pills grow and shrink in size close to the middle of the maze. When Pac-Man eats one of these, he grows to Super size and gains the power to crash through barriers, fly over ghosts, and use Super Speed.

* Keys - The ultimate prize in the original game becomes an integral tool in this game. Eat the keys to open the gates that block your access to the prizes. You don't have to eat all of the keys to complete the stage. The maze contains 15 keys in all.

* Gates - The doors that block Pac-Man from eating the prizes he needs to eat in order to complete the stage. There are 37 gates in all.

* Prizes - Unlike in the original game, where you had to eat dots and collect the prizes for bonus points, you must eat all of prizes to complete the stage. The maze contains 31 prizes in all.

* Bonus Star - Once Pac-Man has eaten a total of 15 items in the maze (including power pills and super pills, but not including keys), a bonus star will appear with one picture to the left, and a rapidly changing picture to the right. Eat the star for bonus points, or try to eat the star when the pictures match for an even higher bonus. Try to eat the star when the pictures on either side match and are the same as the current stage's main prize (for example, apples in Stage 1) to score the maximum possible bonus points.

* Tunnel - By going through one end of the tunnel, Pac-Man and the ghosts can cross over to the other side of the screen. Any ghost who goes through the tunnel will move at half speed. This speed decrease also occurs under the ghost pen now. 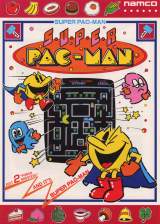