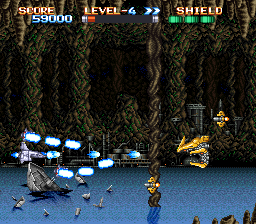 Super E.D.F. is a side scrolling shooter by Jaleco and based on their own arcade game. A race of aliens has secretly landed on the dark side of the Moon with the intention to destroy Earth. The Earth Defense Force has deployed its best space fighters and pilots to counter the impending threat and defend the world from the alien invaders. The players takes control of the XA-1, an advanced fighter mounted with two satellite devices. These flying pods are at the core of the gameplay and their formation can be adjusted to the situation at the press of a button. They can stay close to the ship and provide more power to the main weapon, or be deployed and cause damage to enemy ships while firing in unison. A wide array of eight weapons are available to choose from at the beginning of each level - they range from Vulcan gun, Homing Lasers, Atomics, Lasers and so forth. Although Super E.D.F. doesn't allow the player to switch weapons during play, or to collect power-ups, a clever experience system increase their destructive power in battle. A power bar located at the top of the screen slowly fills up as enemy formations are destroyed - once the bar is full, the weapon gets upgraded and its power increased (leveling up also adds new pattern-formations to the flying pods). A total of five power levels are available and they persist throughout the game - they are retained even if the player gets killed (or at least until he runs out of continues). The player starts each level with three shield units and passed the fifth power level, each new upgrade adds a shield unit to the ship.