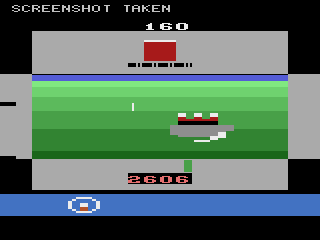 The object of the game is to sink as many enemy ships as possible. As you sink ships, you score points. Some of the ships can drop depth charges, which might damage your submarine.

Depth charges are indicated on the depth charge detector gauge. The gauge alerts you to the closeness and the seriousness of a depth charge. Because your sub is equipped with sonar detection, you can identify the location of enemy ships before they are sighted through the periscope. This allows you to shoot a torpedo before the enemy drops a depth charge.

Submarine Commander includes eight game variations. All odd-numbered games are for one player; all even numbers are two-player games.
Games 1 and 2 are the easiest Submarine Commander games. In these two variations, the enemy ships do not shoot depth charges. All you have to do is shoot torpedoes to sink the enemy ships before you run out of fuel.
In Games 3 and 4, only the destroyers attack with depth charges.
In Games 5 and 6, you will have to avoid the depth charges of both destroyers and PT boats.
Games 7 and 8 are the toughest. You will be dodging depth charges from destroyers, PT boats, and tankers.