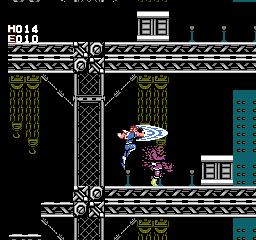 Stand by, Strider. Upon receiving your orders from the commander, you are dropped into the heart of Russia, armed with only your lightning-quick sword. Your task is to infiltrate the Red Army and return enemy secrets to your superiors. Your mission begins in Red Square, but after fighting off KGB attacks there, your clues lead you to the snow-capped mountains of Siberia to battle both the elements and the enemy. If you survive this icy test, your orders are to proceed south to the Lowlands where jungle tribes wait with spears and poison arrows. Now you must return to Moscow to face the Grand Master of the Red Army. It is vital that you get to him before he destroys you or the world will fall under Russian control. The free world relies on your success!

Strider for NES was released in July 1989 in North America.