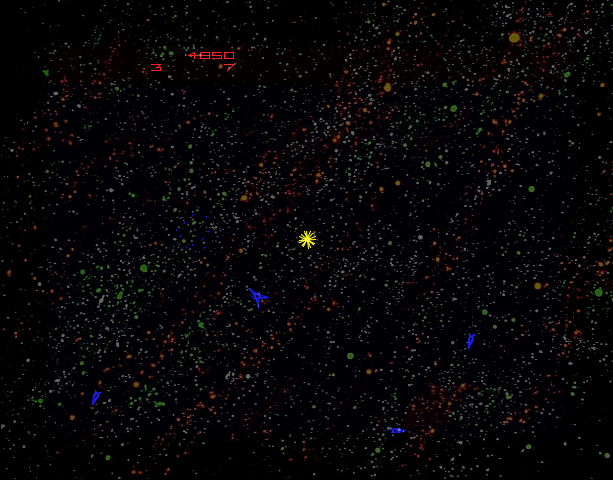 Click to enlarge
(members only)
Solar Quest machines came in a white upright cabinet with a black front section. The side-art covered the top half of the machine, and showed a scene of a white spaceship and a sun on a blue background, along with the title. The marquee was black and had the Solar Quest logo superimposed over a multicolored explosion. The control panel and monitor bezel were blue and decorated with small spacecrafts zooming to and fro. The control panel has no joystick. Play is instead controlled with six buttons. It seems that most vector games had buttons instead of joysticks, they were probably just following what "Asteroids" did. This game uses a black and white vector open frame monitor, but it has several color overlays installed to make the sun yellow, and the top of the screen red. The monitor is actually installed deep inside the machine, and the player views a reflection of it, instead of the actual screen.

This was the last 'Black and white with a color overlay' vector game produced by Cinematronics. Solar Quest was a last minute game. Cinematronics was heading towards the trade show season with only "Boxing Bugs" to show, which they felt was not a winner. Scott Bodden who had left the company earlier, was called in as a contractor to write Solar Quest. He completed this in a mere 90 days.

Designed and programmed by : Scott Boden