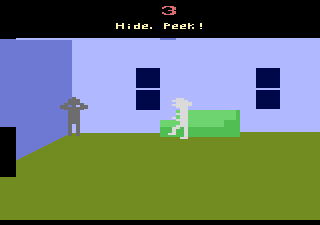 Sneak'n Peek is a one or two player hide and seek game. There are four variations of the basic game and two levels of difficulty to increase your enjoyment and test your skill.

Sneak'n Peek is played in and around a spooky old house with a large yard and three weird rooms. Each room, including the yard, is a separate scene:
- a living room
- a pink bedroom
- a blue bedroom
- the yard

Each scene contains up to five hiding places. That makes a total of twenty hiding locations. Some of them are in really strange places, and some of the locations can change depending on the level you select.

Once the player is hidden, the computer will signal the other player to begin seeking the sneaky hider and his counter will begin counting. Player two must peek in the hiding places. When player one has been found, player two will automatically be pulled into the hiding place and the timer will stop. Immediately the living room scene will reappear and the roles will automatically reverse. Player two can then hide while player one covers his eyes in the corner. (You will probably want your opponent to really cover his own eyes while you are hiding your player so that he can't sneak a peek.)

With practice, you will be able to find and remember all of the hiding places, and be able to fine your opponent in less time than he takes to find you when it is your turn to hide.

If a friend isn't available to play, the computer will be happy to hide from you. It knows all of the hiding places and is very sneaky.