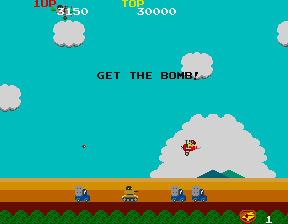 Sky Kid is a 2-D, scrolling shooter type of game. You play as the character Sky Kid. Sky Kid flies around in a bi-plane and is assigned specific targets during the missions. These missions involved bombing specific targets. This would seem easy, however, there are a few obstacles Sky Kid must overcome to get to the target safely. First, the bi-plane is not equipped with the bomb. Sky Kid must pick up the bomb en route to the target. Second, there are both ground and air units that attempt to keep Sky Kid from accomplishing his mission. Last, Sky Kid may have to navigate through some very inhospitable terrain or navigate around cities in order to get to the target. The targets that Sky Kid must bomb will either be a fortress complex or a ship. As one moves farther up in the missions, it isn't uncommon to have multiple targets in one mission. Perhaps barnstorming would have been a better idea. 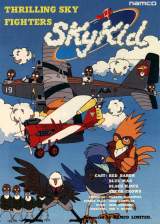