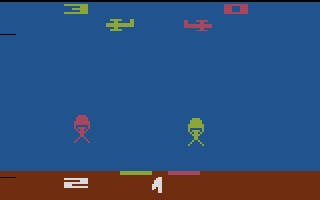 There are five two-player games in Sky Diver. You and your opponent have nine jumps each in which to score points.

Games 1 and 2 are identical with one exception. In Game 2 the width of each landing pad is smaller, making it more difficult to score points. The landing pads are placed in different spots for each jump.

Play 'chicken' in Game 5 with your opponent. There's only one landing pad in the middle of the screen. The first player to land squarely on the pad scores points; the other player receives no points for that jump.