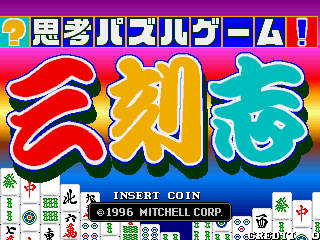 The title of this game translates from Japanese as 'Three Engraved Intentions - ?Thought Puzzle Game!'.

The 'Sankokushi' here is a play on the 'Romance of the Three Kingdoms' saga (known as 'Sankokushi'), but the kanji reads 'three engraved intentions' to refer to the mahjong tiles which must be matched to clear each stage.