A competitive game of scoring. 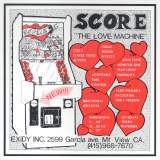