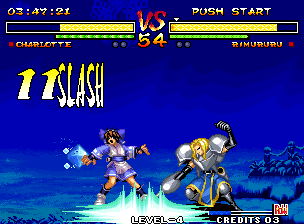 A 5th episode of the Samurai Shodown saga on Neo-Geo with 24 selectable characters plus Poppy (secret character) plus 3 bosses (Sankuro the mid-boss, Yumeji the sub-boss and the general Gaoh as final boss).