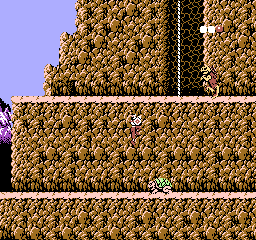 Text from this version:
You and Rygar, the legendary warrior of Argool, must defeat the evil king and his army of dangerous beasts. With powers and weapons from the Indora war gods, you go into battle with Rygar. It's up to you! The enemies are strong, the terrain treacherous, and the challenges difficult. The sun is setting and Rygar is depending on you. Rygar's exploits were once confined to arcades, but now he is battling the forces of evil everywhere. Join forces with Rygar!